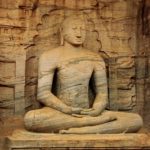 Alistair Vermaak
MEDITATION 1.2 - What is Buddhism & Where did it Start?

In this podcast episode we learn what Buddhism is.  We also learn the history of the founder Siddhartha Gautama who came from a wealthy family, but decided to give up his protected life in the kingdom of his father and wander out into the real world where he discovered all manner of suffering.

After meditating for an extended time, he realized that it was the cycle of man, his behavior, thoughts and actions that led him to suffer.  It was Siddhartha’s belief that he could end suffering if he could teach others the error of their ways.

Send in a voice message: https://anchor.fm/alistairqvermaak/message

This site uses Akismet to reduce spam. Learn how your comment data is processed.